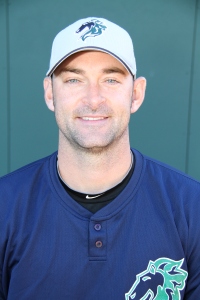 (Photo courtesy of the Charlotte Knights)

When Josh Kinney opened the 2011 baseball season with the Charlotte Knights instead of their parent club, the Chicago White Sox, he took the Triple-A assignment in stride but never stopped working toward a return to the big leagues.

“All you can really do is just play the game and do your best, and hopefully it works out,” the veteran reliever said during the Knights’ May visit to Buffalo.

Last Friday, that work paid off. When ChiSox pitcher Philip Humber ended up on the disabled list, Kinney got the call he’d been waiting for, and barely had time to unpack in Chicago before taking the mound against the Texas Rangers that night.

The quick turnaround apparently didn’t bother the Port High grad, nor did facing the defending American League champions in his first major-league appearance since October 2009. Entering the game with the Sox trailing 7-4 after the Rangers touched starter Jake Peavy for three home runs, Kinney merely whiffed a career-best six of the 11 batters he saw, allowing just one hit and an intentional walk in three scoreless innings of relief.

“Given the circumstances, you don’t really want to see Peavy have that happen to him the way it worked out,” Kinney told reporters afterward. “But I know that’s probably going to be my job – to go in there in those types of situations and save our ‘pen. I was glad to be able to get the three innings and save our guys.”

And those six strikeouts?

“Yeah, that’s nice,” he said. “Obviously, I’m not going out there trying to strike guys out. My game’s kind of letting them put the ball in play and let the defense take care of it. It’s just kind of the way it worked out last night. I was happy with the way I threw the ball and real happy to give the bullpen a break.”

The 32-year-old Kinney started the season as a setup man before taking over the closer’s role in Charlotte. He compiled a 6-3 record and 2.77 ERA in 49 appearances for the Knights, holding opposing batters to a paltry .221 average and earning a team-high 14 saves before last week’s callup.

Now, if the Sox can creep a little closer to the AL Central-leading Detroit Tigers, he might even find himself in a pennant race again.

“It’s been a long road for me in my career,” Kinney said. “Just to get the call to come up here with these guys this time of year, with the position this team’s in, it’s pretty special. I can appreciate that. Forty games left to play and we’re after something. It’s pretty cool and I’m delighted to be here.”

(Information from MLB.com and ESPN.com was used in this story.)