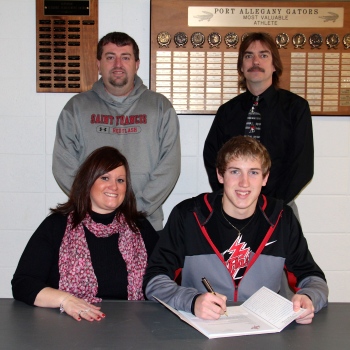 Two trips to the PIAA state track and field championships, including a third-place finish in the Class AA 110-meter hurdles last May, put Nick Conway on the radar of several college programs.

Last weekend, the Port Allegany High School speedster made it official: The top student in the Class of 2013 is headed to Division I, where he intends to continue his running and academic careers at Saint Francis University in Loretto, Pa.

“What we’re looking for is obviously talented, but tough, hardworking, intelligent student-athletes, and we’re also looking for men and women of character. Nick fills all of those qualifications,” said Red Flash head coach Douglas Hoover. “We’re a unique Division I institution, and I feel like Nick is a very good fit for us on that front. He’s someone we’re looking to develop across all of our event areas in track and field. Nick certainly helps us out on the hurdling front, and he’s obviously just a talented student-athlete in general. He’s high-jumped very well, he’s done some other events very well too. He’s just a tough, hard-nosed, hardworking student-athlete, and that’s what we’re looking for.

“I think we’re a good fit for him academically as well as athletically. I think he felt comfortable here in this environment, with our classroom size and the academics that we had to offer.” 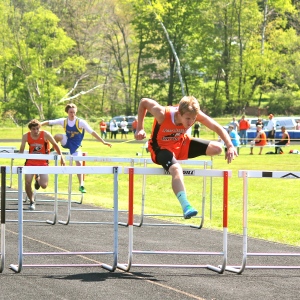 Conway clears a hurdle well in front of the rest of the field at last May’s North Tier League meet.
(Photo: Pam Fischer)

The two-time defending 110-meter District 9 champ, who also made several All-State football squads and the MaxPreps.com Small-School All-American second team as the Gators advanced to the state semifinals last fall, has spent the winter honing his skills on the indoor circuit. His personal record of 8.21 seconds in the 60-meter hurdles is the third-best in Pennsylvania and the 21st-fastest in the country this year in times reported to Milesplit.us, earning the Port senior First Team Elite status from the national website.

“When he first came out (for track) he had some quickness, he had some speed, and I think the genetic makeup because Dad had done this,” said Port Allegany track and field coach George Riley, noting that Conway’s father Hunter, who works with the Gator hurdlers and high jumpers, won a Delaware state championship in the event.

“But as the first year went along, you realized that you had – I always compare him to Mikey Mitchell (the two-time state 300-meter champ from Smethport) – you had the Mike Mitchell who dominated the hurdles in the North Tier League for four years. I was like, okay, this is lovely. No, I didn’t expect it, but once you started to see it come together you knew you had something special.

“Whether it’s genetics or his dad being here and doing what he’s doing – and having known what he was doing – I think those two things were a big help.”

For the younger Conway, hearing about his father’s exploits helped spark his competitive spirit.

“I didn’t really know about his track career until eighth grade,” Nick said. “When it surfaced, I kind of was like, ‘I kind of want to beat you.’ I’ve always wanted to beat his times, and my sophomore year, I did beat his times. Felt pretty good with that, but then we didn’t want to leave it at that. We wanted to keep improving.”

That desire was evident to Riley early on.

At least six colleges contacted Conway about competing for them, but he quickly decided Saint Francis, a member of the Northeast Conference, was the right fit.

“I kind of made it real apparent that I put my education over my athletics,” he said. “I really want to be a doctor, and I chose the physical-therapy route to do so, and there are only three schools in Pennsylvania that have a guaranteed program (St. Francis, Gannon, Duquesne).

“When I started looking at it, everything just started lining up, everything was perfect. As soon as I’m accepted, I’m guaranteed into their doctorate program. It’s accelerated, so I’m only going to school for six years, and it’s one of the top educations in the country. I think it was ranked 25th in the nation last year. The other schools just didn’t compare education-wise.”

He’s also anticipating working with Red Flash sprints/hurdles coach Augustine Schmader, who ran in the Olympics for his native Liberia before coming to the United States and winning a national championship at Lincoln University.

“I don’t know how you couldn’t respect a man with such credentials,” Conway said. “I think I can learn a lot from him.”

Hoover, who started talking to Conway soon after taking over the program last summer, is looking forward to it as well.

“We’re definitely excited to have him here,” he said, “and to see what we can do for each other.”

Following an award-jammed senior season which included breaking every major PIAA passing record during Port Allegany High School’s run to the Pennsylvania Class A state semifinals and being named to the MaxPreps.com Small-School All-American first team, Matt Bodamer has chosen to continue his football career at Edinboro University.

“In the end, Edinboro’s program was really for me,” said the Gator standout after signing his National Letter of Intent earlier this week. “Their academic program, which is engineering management – I didn’t find any other school that had that – and their football coaches are great. I’ve watched multiple PSAC games, and it’s great football. It’s a place that I’m comfortable with, around the area. When you get the right feeling – I can’t really explain it other than that. It was a hard decision between Kutztown and Edinboro, but it just felt right.”

For Port Allegany head coach Mike Bodamer, the decision makes sense both on and off the field for his son, who earned the Gatorade Pennsylvania Player of the Year and Pa. Football News “Mister Football” awards along with becoming just the second two-time Olean Times Herald Big 30 Player of the Year.

“From when he first started, that’s always been one of his goals, to go on and play at the next level. That’s what he’s been working for,” he said. “He had some walk-on offers at some of the Division I schools, but I think Division II is a better fit for him and the PSAC is a really, really good football league. It’s a tremendous style of football. I think he’s just better suited – with his size, and he needs to work on his arm strength a little bit – but I think he has a better chance of playing. I just can’t see him going someplace to sit for three or four years before he has a chance at it.”

The younger Bodamer – who carries a 3.91 GPA – decided Edinboro was the right fit in the classroom, too, since the school offers a program which combines engineering and business concentrations.

“It’s a basic engineering degree plus a management degree, almost like an MBA. This is the only program I’ve seen like that,” he said. “Anywhere else, I would’ve had to get a physics or engineering degree, then go on and get my MBA afterward.”

And the fact that it’s just a couple hours away from Port Allegany doesn’t hurt, either.

“During his search, he kind of limited himself because he didn’t want to go too far away from home, so that really limited the number of schools,” Mike Bodamer said. “We had calls from Texas and California and places like that, but he didn’t even want to begin to look there. He wanted to find something close to home.”

Matt explained, “I wanted to stay within a six-hour area. My brother’s in the area at Gannon, two hours away from here and an hour away from my grandparents and everyone in Oil City, and a couple hours from Pittsburgh where my sister is. I just know the area so well, and that added to the comfort factor.”